Hi! Welcome to PidgiWiki. Glad to see you here!

Hippowdon was part of a press kit for Pokémon Diamond and Pearl back when those games were under development. Cloyster came from a 2013 Video Game Regionals press release, as a special Cloyster was distributed at events. Hope this helps! (btw, the people at --immewnity (talk) 19:37, 28 August 2015 (UTC)

I uploaded a new file with the wrong name

No problem, it's all good. You probably noticed i updated some of the Pokémon artwork from Ruby & Sapphire. They're not exactly like the official artwork but still pretty close. --Moonboy65 (talk) 02:10, 7 October 2015 (UTC)

Unfortunately, Pokémon didn't send those pieces of artwork. It's a bit of a trade-off, I guess, since these new pieces of art are not as big as the others you mentioned.--immewnity (talk) 17:17, 11 August 2016 (UTC)

Hi there! First off, thanks so much for what you've been doing - both the color correcting and the uploading of the Pokédex art are things that have been on the backlog for a while. The way that I did those art was by bringing the images into Photoshop, converting the colorspace to CMYK, then going back to RGB. It's not perfect, but it does okay.--immewnity (talk) 03:36, 7 September 2016 (UTC)

I think you're overdoing it with some images - I'm reverting some of them. Not all images with vibrant colors are incorrectly colored - it's a hard thing to be able to tell, and is usually better to tell in the context of other images.--immewnity (talk) 11:04, 7 September 2016 (UTC)

Hi there! Quick question about the art for the two Ultra Beasts. The newer versions you uploaded were slightly smaller and had rougher borders than the other ones. Was there any need for the change?--immewnity (talk) 02:34, 13 December 2016 (UTC)

Not really, I was hoping there'd be higher quality versions from the Pokémon Company. Speaking of that, did you get to check and see if anything popped up? --Moonboy65 (talk) 02:54, 13 December 2016 (UTC)

RE: Pokémon Diamond and Pearl Artwork

They were from a press kit someone uploaded on AssemblerGames - no idea if more exist or will ever surface. --immewnity (talk) 06:06, 28 December 2016 (UTC)

Hey there! The art came from UNIQLO's Pokémon competition, of all places. They've got a character list with base art of 1000x1000 for all Pokémon through Blacephalon (and Zeraora with some URL manipulation): https://www.uniqlo.com/utgp/2019/us/ . I still gotta update those with the source and everything...--immewnity (talk) 15:55, 24 October 2018 (UTC)

BTW, for the files you're uploading now, it would be awesome if you could check that the previous version isn't larger/better quality. It's a bit challenging, as some of the existing art is slightly larger but poor coloring (in which case the UNIQLO ones should be used), but Bellsprout (for example) was larger and correct coloring before, as it came from a Let's Go press release. If you're unsure, go ahead and upload the UNIQLO ones and I'll revert the ones that need it.--immewnity (talk) 22:13, 24 October 2018 (UTC)

There were several places that art was posted, I know at least Nintendo UK had some of them a while back, and some may have been from the now-defunct FANKIT-Nintendo, which was a site run by Nintendo France. I still need to finish uploading the PNG versions of them, cause some are non-transparent JPGs and I've got the PSDs.

As far as if it's still at any of the original sources, I'm not sure. My guess is that Nintendo UK might still have them on their press site, but I recall they did a purge of old things a while back, and I'm not sure what their cutoff was. Rest assured, I've got everything backed up and will be uploading them... "soon". There's just soooooo many things in the backlog... --immewnity (talk) 20:18, 6 April 2019 (UTC)

Haha, many many many different places, some of which no longer exist (I've got over 2TB worth of images in the backlog for this site)! A majority are from official press emails/sites/FTPs. --immewnity (talk) 04:42, 28 June 2019 (UTC)

Hey there, Moonboy65; finally snagged the chance to message you - noticed that you uploaded source material art stuff in relation to Super Mario Party the other day; thanks for that (especially the Princess Peach ones). That said, I'm curious to know specifically where you were able to obtain them (I'm guessing it's one of Nintendo's media servers); also, are you still sorting out the ones that haven't been added here yet in relation to that game? I'm personally am looking out for any more which involve not just Princess Peach, but Daisy and Rosalina as well.

Also, have you run into any breakthroughs yet in regards to any promo art assets from Mario Tennis Aces as well (not the model art ones)? I (and possibly a few others here) are still holding out hope since we never gotten great promo art asset treatment regarding this prior to the game's release itself. Thanks for your help in advance. --MeritC (talk) 09:48, 11 March 2020 (UTC)

Heya, I got the Super Mario Party artwork from the pidgiwiki server on FileZilla thanks to Immewnity. As for sorting and Mario Tennis Aces, you could ask Immewnity, he has more knowledge on those than myself. Right now I'm only working on missing box art from FilleZilla for DS and GameCube. --Moonboy65 (talk) 14:53, 11 March 2020 (UTC) 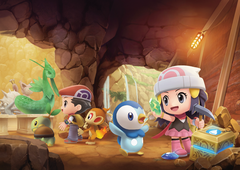